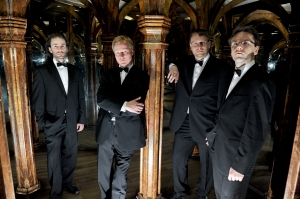 Since early 2007, the Zemlinsky Quartet has recorded exclusively for the French record label Praga Digitals. Their very first 4-CD set recording (early works for string quartet by Antonín Dvořák) received the coveted “Diapason d´Or“ prize in March 2007. In 2009, in cooperation with Kocian Quartet, the quartet has recorded the complete works of Czech composer Viktor Kalabis (1923-2006, arguably the most influential Czech composer of the latter 20th Century). Other Praga Digitals releases include all the string quartets and early chamber music by Alexander Zemlinsky (2006, 2011), string quartets op. 34 and 106 by A. Dvořák (2012), a 4-CD set of early quartets by Schubert (2008), a rare disc with Spanish music for strings (2012), two discs of Mendelssohn quartets (2010), works by A. Glazunov (2010), the famous quartets by Haydn, Mozart and Beethoven (2011), and two CDs in cooperation with Pražák Quartet containing Mendelssohn‘s viola quintet op. 18 and Martinů quartet No. 1. The first CD of the quartet (2003) contains works by famous Czech composers Dvořák, Janáček, Suk and Richter. Their second CD, complete quartets by Josef Suk (2004), resulted in a recital of the ensemble in the 2005 Prague Spring Festival. The recordings of the Zemlinsky Quartet have received universal critical acclaim (The Strad, Diapason, Fanfare, Gramophone, …).

During its early years while studying in the Prague Conservatory and the Academy of Performing Arts Prague, the ensemble was coached by members of renowned Czech string quartets including the Talich, Prague, Kocian and Pražák Quartet. The ensemble also took part in several master classes (ProQuartet, France; Sommerakademie Reichenau, Austria – 1st prize for the best interpretation of a work by Janáček). The recent tutor of the quartet has been Josef Klusoň, the violist of the Pražák Quartet. During 2005-08, the quartet studied with Walter Levin, the first violinist of LaSalle Quartet.

In 2006-11, the Zemlinsky Quartet acted as assistant quartet-in-residence at Musikakademie Basel (Switzerland). During its tours the quartet is often invited to give numerous master classes to students of any age, and it also performs in school concerts. Recently, František Souček and Petr Holman have also been appointed as professors of the Prague Conservatory. Zemlinsky Quartet is named after the Austrian composer, conductor and teacher Alexander Zemlinsky (1871-1942), whose enormous contribution to Czech, German and Jewish culture during his 16-year stay in Prague was underestimated for decades. His four string quartets (the second one being dedicated to his student and brother-in-law Arnold Schönberg) belong to the basic repertoire of the ensemble. Since 2005, the quartet has maintained a special relationship with the Alexander Zemlinsky Foundation, Vienna.