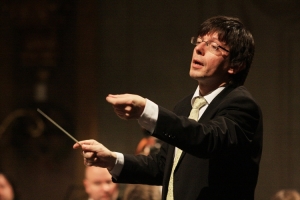 Václav Luks, the founder of the Prague baroque orchestra Collegium 1704 and of the vocal ensemble Collegium Vocale 1704, began his studies at the Pilsen Conservatory and at the Academy of Performing Arts in Prague (French horn, harpsichord). He then continued his studies with specialized research on early music at the Schola Cantorum Basiliensis in Basil, Switzerland (in the fields of period keyboard instruments and historical performance practice). After returning from abroad in 2005, he transformed Collegium 1704 from a chamber music ensemble that had already existed when he was a conservatory student into a Baroque orchestra, and he founded Collegium Vocale 1704. The immediate impetus for their founding was a project initiated by Václav Luks titled BACH – PRAGUE – 2005. Within the framework of that project, performances were given of major vocal works with instrumental accompaniment by J. S. Bach. That year, the two ensembles also introduced themselves at the Prague Spring International Music Festival with a performance of Bach’s Mass in B Minor, and since then they have been regular guests at the festival.

With Václav Luks, Collegium 1704 has quickly established itself among the world’s elite ensembles devoted to performing the music of the 17th and 18th centuries, and Luks has played a significant part in the renaissance of the music of the Bohemian composer Jan Dismas Zelenka. In 2008, he founded the successful concert series Music Bridge Prague – Dresden. Since the autumn of 2012, we have been able to encounter Václav Luks regularly at Prague’s Rudolfinum, where he is realizing a concert series with Collegium 1704 that focuses on the art of singing in the 17th and 18th centuries. The title of the concert series is Stars of Baroque Opera. With his ensembles, Václav Luks is a frequent guest at such prestigious European festivals as the Lucerne Festival, Oude Muziek Utrecht, MA Brugge, the Festival de La Chaise-Dieu, the Händel-Festspiele Halle, and the Bachfest Leipzig, and at important concert halls (Konzerthaus Wien, Philharmonie Köln, Laeiszhalle Hamburg, BOZAR in Brussels etc.).

In 2009, Václav Luks prepared a production of Händel’s opera Rinaldo for the National Theatre in Prague, then he performed the opera with great success at opera houses in Caen, Rennes, and Luxembourg, and at the Royal Opera of Versailles. His 2013 production of the opera L’Olimpiade by Josef Mysliveček attracted a great deal of attention on the European music scene. Public performances of the production were given at the National Theatre in Prague, in Caen, Dijon, and Luxembourg, and at the Theater an der Wien.

Besides working intensively with Collegium 1704, he also collaborates with other renowned ensembles, such as La Cetra Barockorchester Basel and the Dresdner Kammerchor. Václav Luks has made both orchestral and solo recordings for the ACCENT, Supraphon, and Zig-Zag Territoires labels, and he has been invited to sit on juries of international competitions (Johann Heinrich Schmelzer Wettbewerb Melk, Prague Spring International Music Competition, Bach-Wettbewerb Leipzig). Since 2013, he has been teaching choral conducting at the Hochschule für Musik Carl Maria von Weber in Dresden.