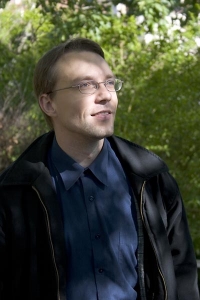 Petr Rajnoha graduated in 1995 from the Brno Conservatory, where he studied the organ. In the years 1996-1997 he studied at the Conservatoire National du Région de Rueil-Malmaison in Paris with the famous organist Susan Landale. After returning home he continued his studies in Prague in the class of Docent Jaroslav Tůma and in 2000 he won a scholarship for a course in Lyons under the famous Professor Jean Boyer. In the course of his studies he took the opportunity to discover the opinions of other significant teachers of the organ at their masters' courses.

Petr Rajnoha has achieved many successes in his artistic activity to date at international competitions. Among his greatest successes, however, are 3rd Prize at the 51st Prague Spring International Competition (where he also won the Prize for the Best Interpretation of a Contemporary Czech Composition and the Special Prize of the Bärenreiter Publishing House for the best performance of an organ work from the point of view of historical practice) and the winning of two prestigious competitions in Germany – in Gelsenkirchen and in Nuremberg (the Johann Pachelbel Prize and the Prize of the Public).

Thanks to his approach to the authentic interpretation of the organ music of all periods Petr Rajnoha is invited to various Czech and European music festivals. He records for Czech Radio pieces played on historical instruments and he co-operates with important Czech orchestras. He teaches organ at the Conservatory in Olomouc. He recorded two CD´s with Josef Klička´s complete organ works.