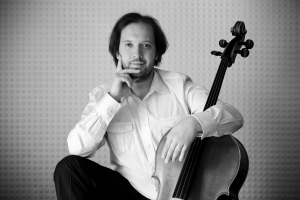 Petr Nouzovský is one of the foremost cellists of the young Czech generation. He studied in Prague, Dresden and Madrid. He has improved his art in master classes with Boris Pergamenschikov, David Geringas or Mstislav Rostropovich. As a soloist performed all over the world – Moscow – Rachmaninov Hall or Moscow International Performing Arts Center, St. Petersburg – Glinka Hall, Bolzano, Amsterdam – Concertgebouw, Istanbul, Los Angeles and Buenos Aires – Teatro Coliseo to name just a few. Nouzovsky’s solo debut concert at the Prague Spring Festival was in 2005, at Amsterdam’s Concertgebouw in 2008, at Pau Casals Festival in 2010, at Santander Festival in 2011 and at Kasseler Musiktage in 2011. His busy concert schedule includes some 150 solo concerts in a year. He is featured on 15 CD recordings. His cello is a Jean Baptiste Vuillaume instrument from 1835.