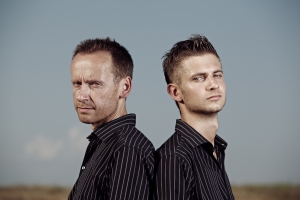 The OK Percussion Duo has been on the music scene since 2007. Martin Opršál and Martin Kleibl, native to the Czech Republic, are the founders and members of the duo. A notable feature of the ensemble is its multi-faceted genre approach. This is manifested in three equal interpretation levels. The Classical set includescontemporary works for percussion duo by Czech and foreign composers. The Club Program, which finds inspiration in jazz, consists of compositions and arrangements of jazz standards by the duo’s members. The Stage Show uses a special array of instruments designed by the artists and is entirely based on their own compositions. As genres, the three programs are very different; yet they are intertwined due to the broad musical experience of both performers.

During his studies at the conservatory, Martin Opršál became a member of the Brno Philharmonic Orchestra, of the International Gustav Mahler Orchestra, and of the European Union Orchestra (conducted by Claudio Abbado). After  studying at the conservatory, he went on to study at the Janáček Academy of Music and Performing Arts, where he now works as an associate professor of melodic percussion instruments and chamber music, as well as being Head of the Percussion Department. He was one of the founding members of the DAMA DAMA Central European Percussion Ensemble, with whom he won the international competition of percussion orchestras in the Netherlands.  His primary instrument is marimba. In his solo performances he purposefully stages Czech and international premieres of works written for the instrument. He coaches seminars on the interpretation of contemporary music for marimba and has been invited to participate in competition juries. He is a sought-after performer of contemporary chamber music. He also works on multi-genre projects: he contributed, among others, to two of Iva Bittová’s CDs and to the recording of the Stories of the Danube symphony  by the jazz legend Joe Zawinul. Martin Opršál has performed solo and in ensembles for a number of concerts and music festivals in Central and Western Europe, Japan,  and Korea. In addition, he has recorded and released his CD Reverberations, featuring solo and chamber music for the marimba.

Martin Kleibl demonstrated his talent at the conservatory, where he became a member of The Young Sound Forum of Central Europe (collaborating with Krzysztof Penderecki). While studying at the Janáček Academy of Music and Performing Arts, he received training in classical, jazz, and popular music. During his two-year scholarship at the University of North Texas in the jazz studio of Ed Soph, one of the world's top educators, he also gained experience in Indian, Latin American, and African music, expanding his musical horizons through participation in a series of workshops with top performers. He is currently employed as a percussionist in the Brno Philharmonic Orchestra. As a prominent performer of the new generation, he has been invited to collaborate in projects by leading Czech and foreign jazz artists such as Didrik Ingvaldsen and Fabio Delvo. He also focuses on experimental music; he has collaborated with the Swiss Paul Klee Ensemble and the Slovak Quasars Ensemble. Despite his versatility, the drumset, which he uses in both jazz and popular settings, as well as in classical music, remains his principal instrument. He has performed in most European countries, in Japan, and in the USA, both as a soloist and in ensembles. Martin is a teacher as well, including holding a position at the Percussion Department at the Janáček Academy of Music and Performing Arts.