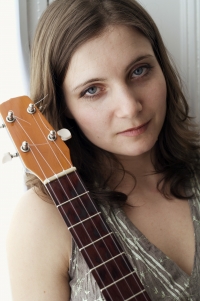 A daughter of Czech actors, Marta Töpferová grew up around the theater, moving from city to city with her parents behind the iron curtain. At age eleven, she immigrated to the U.S. with her mother and sister. "I was cut off from my own culture ... so starting my life over in America, I felt most drawn to the diversity of this country, the immigrants.” During her adolescence in her new surroundings, Marta came to feel a great affinity with the Spanish language and a deep fondness for Latin music and culture, and became fluent in Spanish, her third language after Czech and English. Simultaneously, she found something essential: an anchor in music.

For eight years, between the ages of eight and fifteen, Marta performed and recorded a wide range of works by composers such as Brahms, Poulenc, Haydn, and Pergolesi with Prague’s Mládí choir and The Seattle Girls’ Choir. Subsequently, her calling directed her to a passionate study of Latin American song forms, taking voice, guitar and dance lessons, including a six-month stay in Spain. Her talent continued to blossom, and since her arrival to New York City in 1996, Marta’s music rapidly developed into a remarkable mix of Latin American folklore with undeniable hints of her eastern European heritage.

Called by the BBC as “a leading light of the nueva canción movement of today”, Marta’s elegant and profound voice has enchanted fans worldwide for over a decade. Equally gifted as a composer and lyricist, she has written over sixty original songs and produced five albums as a leader. Her first album, “Sueño Verde”, was co-produced by Joe Boyd, whose discography includes many artists such as REM, Fairport Convention, Nick Drake, Cubanismo among others. In 2002, Marta put out a collection of Czech folk songs titled “Homage to Homeland” and in 2005, 2006 & 2009, three luminous Spanish language albums of mostly original material - “La Marea” (World Village), “Flor Nocturna” (World Village) and "Trova" (World Village).

In 2004, she began touring internationally, appearing on stages and festivals around the world, gaining well-deserved recognition for her unique artistry. The highlights of Marta’s performing career include concerts at The Blue Note, The World Music Festival in Chicago, London’s Queen Elizabeth Hall, Jazz Festival Royale in Thailand, The Vienna Jazz Festival, The Hague Jazz Festival, The London Jazz Festival, The New Morning in Paris, and many other venues in Argentina, Spain, Italy, Switzerland, Hungary, Germany and the Czech Republic. Marta has also been featured on numerous radio and TV programs including NPR’s “Around Noon”, BBC’s “The World”, RTVE (Spanish National Radio and TV), ARTE TV (France), Radio W (Colombia), among other networks.

Most recently, in addition to her Latin American repertoire, Marta began writing songs in English for a new ensemble, which consists of electric guitar, French horn, bass and drums.

Marta appreciates aspects of all three cultures, which have influenced her life - Czech, American and Hispanic — and admits that assigning an identity can be difficult. “I feel very mixed,” she says, “I guess my destiny has asked me to embrace the different cultures as a part of my life and to continue to discover the richness within them.” If her identity vacillates, music gives her constancy. “Music is like an anchor to me,” she says, “a dear companion. Through all the changes in my life, it has always accompanied me.”

So whether choosing to write in Czech, English or Spanish, Marta’s remarkable ability as a songwriter shines through in all her work, making her a truly one of a kind artist. “It’s a question of deep affinity with music and poetry. I feel a calling to preserve music that is honest, beautiful and poetic. I’m doing what is sincerely close to my heart.”