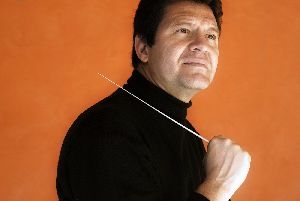 Manuel Hernández-Silva is one of the orchestra conductors with greater potential nowadays due to his great charisma, versatility of his repertoire, and his broad and deep musical studies, achieved over the course of 20 years; including his stay in Vienna, in whose Conservatory he earned his diploma with Honors under professors R. Schwarz and G. Mark. The same year of his graduation he won the contest «Forum Junger Künstler» of Vienna’s Chamber Orchestra, conducting said orchestra in Vienna’s Konzerthaus and in Linz’s Brucknerhaus.

He has been the artistic and chief conductor of Córdoba’s Orchestra (Spain) since 2005 until 2012, having taken this group to the top of Spain’s musical sphere, as attested by the musical quality of his recordings, as well as the undeniable success obtained in their tour through the great venues of Austria and the Czech Republic. It is worthwhile to stress the long standing ovation received in the Musikverein of the Austrian capital. He also played a distinguished role with Caracas’s Simón Bolívar Orchestra, with which he worked intensely for five years.

Hernández-Silva’s repertoire spans from the Viennese classicism — period to which he has devoted his greatest concentration — including the logical bridge to the German and Russian Romantic tradition, to the Spanish or Iberoamerican music.

Maestro Hernández-Silva has engaged in an intense docent activity, teaching international courses of performance and conduction, as well as numerous conferences.

All this has earned him the recognition of the musicians with whom he has worked, as well as that of the public and specialized critics.