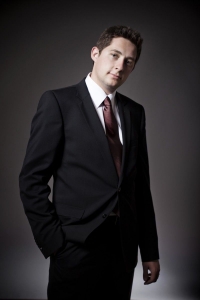 Lukáš Klánský was born on March 22nd 1989 in Prague. He is a laureate of many national as well as international competitions e.g. EPTA 2002, Agropolli 2003, Karl Drechsel fordepreise 2007, Beethoven‘s Hradec 2007, International Rotary Piano Competition 2012 and Darmstadt International Chopin Competition 2013. At the age of fifteen he made his debut in Dvorak´s Hall in Prague with the Prague Chamber Orchestra playing Mozart’s Concerto F Major.

Between 2004 – 2010 he studied at the Prague Conservatoire in the class of Eva Boguniová, graduated with Chopin’s Piano Concerto in F minor with the Prague Conservatoire Symphony Orchestra. Since 2010 he has been studying at the Academy of Performing Arts in Prague under his father, Prof. Ivan Klánskýt. His musical development has been influenced not only by his tutors but also by Martin Kasík as well as world-famous Garick Ohlsson, whose Prague masterclass Lukáš Klánský attended.

At his numerous concert performances he had the chance to introduce himself to the audiences in many countries. Beside the Czech Republic it was for instance Slovakia, Germany, France, Italy, Belgium, Netherlands, Croatia, Slovenia, Poland and Turkey. Because of his extraordinary talent, musical intellect and exemplary sound quality he is not only a highly acclaimed soloist, but also a sought-after chamber music player. He regularly gives the concerts with violinist Jan Mráček, a laureate of the International Competition the Prague Spring, with cellist Ivan Vokáč, but also with respected artists as Václav Hudeček or Pražák Quartet.