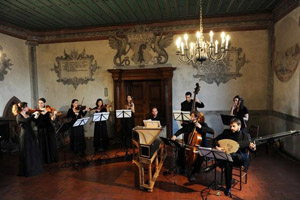 La Cetra Barockorchester Basel was founded in Basel in 1999 at the initiative of Dr. Peter Reidemeister, then Director of the Schola Cantorum Basiliensis. The name is taken from the title of Antonio Vivaldi’s collection of 12 violin concertos op. 9 first published in Amsterdam in 1727. “La Cetra” refers to the ancient lyre or zither.

La Cetra Barockorchester quickly established itself on the international stage as one of the leading ensembles in historically informed performance practice. Resounding public and critical acclaim at important international festivals, in Europe’s leading concert halls and through a wide range of broadcast and CD productions give testimony to the orchestra’s rapid development and brilliance.

La Cetra’s artistic director since 2009 is the well-known Baroque conductor Andrea Marcon.  He has brought new impulses and a fresh approach to the rich and often rediscovered repertoire of the period. The musicians are primarily graduates of the Schola Cantorum Basiliensis, the Swiss “elite training centre” for early music. The ensemble maintains an intensive collaboration with the research department of the Schola Cantorum enabling the musical programming and preparation to be accompanied by the most up to date musicological research. A number of fascinating discoveries of works of Brescianello, Venturini or Paisiello have lent support to this approach. The repertoire of the orchestra ranges from the early seventeenth century operas of Monteverdi through to symphonic works of the classical and early romantic periods.

Over the years, La Cetra has worked regularly with a number of well known guest conductors, among them Attilio Cremonesi, Jordi Savall, René Jacobs and Gustav Leonhard as well as with such soloists as Andreas Scholl, Vivica Genaux, Magdalena Kožená, Patricia Petibon or Giuliano Carmignola, to name a few. The repertoire and the occasion often determine the size of the orchestra which can go from a small chamber ensemble to a full-fledged orchestra with chorus and soloists. The La Cetra Vokalensemble was established in 2012 at the initiative of Andrea Marcon and appears regularly with the orchestra in opera and oratorio, as well as on its own.

La Cetra’s ambition is to bring alive the music of the past – with a fresh, dynamic and contemporary approach – for the audience of today.