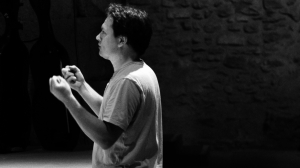 Krystof Maratka became interested in composition at a very young age. His family greatly encouraged his artistic development. His grandfather - Josef Maratka - was a well-known Czech sculptor who molded Dvorak's death mask. After studying piano (with Jaromir Kriz) and composition (with Bohuslav Rehor) at the Prague Conservatory, he studied composition with Petr Eben at the Academy of Performing Arts (1993). In 1994 he came to Paris on a scholarship received from the French Institute in Prague, and since then he has been living there with his French wife Carine Lethiec who is violinist and artistic leader of the Ensemble Calliopée. Numerous prestigious commissions from various French and other foreign festivals and performances by important musicians testify to his success. In 1999 he became a Natexis foundation prize winner (a prestigious French music sponsor). As a composer, he has been commissioned by several outstanding ensembles and orchestras (Quatuor Kandinsky, Mozart Piano Quartet, Ensemble de violoncelles de Paris, Grieg Trio, Orchestre Philharmonique de la Radio France, Toronto Symphonic Orchestra, Colorado Symphony Orchestra, Brno Philharmonic Orchestra, Berg Chamber Orchestra a.o.). He has often received invitations to be "composer in residence", e.g. at Korsholm Music Festival in Finland (1998), Irkutsk Music Festival (2003), Caramoor International Music Festival in Katonah, N.Y. (2004).  The National Theatre in Prague commissioned a symphonic work for the official celebrations marking the Czech Republic's accession to the European Union (on the 1st May 2004); on this occasion Maratka conducted the Prague National Theatre Orchestra. Earlier that year there was a first Czech performance of his Concerto for viola and string orchestra Astrophonia at the festival "Prague Premieres 2004". Three years later, his melodrama Four-legged Crow was performed at the "Prague Premieres 2007" by the Ensemble Calliopée. Many of the Czech first performances of his works has been performed by the Berg Chamber Orchestra (with conductor Peter Vrabel).