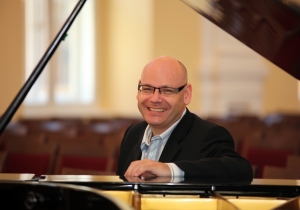 Karel Košárek records for acclaimed record labels such as Supraphon, Hyperion, Etcetera and Naxos. His first solo recording included works by B. Smetana, B. Martinů, S. Barber and G. Gershwin (Radioservis in 2000). In 2005 a CD of songs with a highly-acclaimed Czech baritone Roman Janál was released for Supraphon. In 2008 he recorded a CD with compositions by Bohuslav Martinů with the Czech Philharmonic Orchestra and violinist Bohuslav Matoušek under the baton of Christopher Hogwood (Hyperion). His latest recordings include Bohuslav Martinů solo piano compositions for Supraphon and F. X. Dušek piano concertos with the Prague Chamber Orchestra for Etcetera.

He has frequently cooperated with the mezzosoprano Magdalena Kožená, accompanying her in concerts throughout the Czech Republic as well as in the USA (New York, Washington, Atlanta, San Francisco). In May 2010 he performed the Shostakovitch Piano Quintet in G minor with the Škampa Quartet at the Prague Spring Festival and appeared at the Janáček May Festival. In 2011 he performed Rachmaninov Piano Concerto No. 3 with the Prague Symphony Orchestra and conductor Zdeněk Mácal. In the 2011/12 season he was soloist of the Czech Philharmonic Orchestra, Moravian Philharmonic Orchstra Olomouc and the Lithuanian National Opera. With the Prague Philharmonia he appeared at the Janáček May Festival and with the Brno Philharmonic Orchestra at the Špilberk Festival. In 2012 he premiered the piano concerto “Falling Leaves” by Aleš Březina at the Holešov Festival. In the 2013/14 season he will perform at the Resonanzen Festival in the Swiss St. Moritz and with the Baborák Ensemble at the Prague Spring Festival a.o.