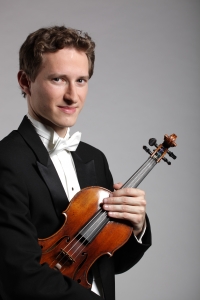 The young Czech violinist Josef Špaček is fast emerging as one of the most talented virtuosos of his generation. He has been guided by some of the most highly regarded pedagogues, including Ida Kavafian and Jaime Laredo at the Curtis Institute of Music and Itzhak Perlman at the Juilliard School. In May 2012 he was laureate of the International Queen Elisabeth Competition in Brussels; in 2009 Josef won the Michael Hall International Violin Competition (New Zealand) and both Third Prize and the Young People’s Jury Prize at the Carl Nielsen International Violin Competition in 2008. He currently combines a flourishing solo career with the position of concert master of the Czech Philharmonic Orchestra.

The Supraphon label released Josef’s first recital recording in April 2013. Together with pianist Miroslav Sekera he performs works by Janáček, Smetana and Prokofiev. His 2010 recording of various works by H.W. Ernst was released on Naxos in March 2013. In 2006 he recorded his debut CD featuring the complete sonatas for solo violin by Eugène Ysaÿe. Recent concert highlights include solo performances with the Czech Philharmonic conducted by Jiří Bělohlávek and Jakub Hrůša (including concerts in Prague, the UK, Japan and Australia), the Malaysian Philharmonic Orchestra, the Janáček Philharmonic, the Martinů Philharmonic, the Erkel Chamber Orchestra, the Prague Symphony Orchestra, and recital appearances in Europe, Asia and the USA.

Josef Špaček plays a violin made in 1855 in the workshop of Jean-Baptiste Vuillaume.