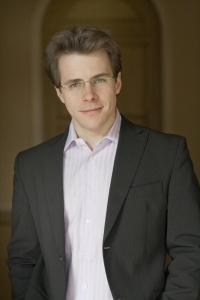 Born in the Czech Republic and named by Gramophone in 2011 as one of ten conductors “on the verge of greatness”, Jakub Hrůša is Music Director and Chief Conductor of the Prague Philharmonia, Music Director of the Glyndebourne Tour, and Principal Guest Conductor of Tokyo Metropolitan Symphony Orchestra. He is a regular guest with many of Europe’s leading orchestras, including the Philharmonia Orchestra, Czech Philharmonic, Leipzig Gewandhaus Orchestra, Orchestre Philharmonique de Radio France, Finnish Radio Symphony, SWR Symphony Stuttgart, WDR Symphony Cologne and the BBC Symphony Orchestra. In 2010 he became the youngest conductor since 1949 to lead the opening concert of the Prague Spring Festival.

Highlights of the coming season include his debuts with Swedish Radio Symphony, RSB Berlin, Cincinnati Symphony, the Gulbenkian Orchestra and Luxembourg Philharmonic; appearances with the Philharmonia Orchestra and BBC Symphony on tour and in London; and Rusalka for the Glyndebourne Tour. In the field of opera, Jakub Hrůša made his Glyndebourne Festival and Tour debuts in 2008 conducting Carmen, followed by Don Giovanni (Festival and Tour 2010), The Turn of the Screw (Festival 2011), and La bohème (Tour 2011). He has also led productions for Royal Danish Opera (Boris Godunov) and Prague National Theatre (The Cunning Little Vixen; Rusalka).

As a recording artist, he has released six discs for Supraphon including a critically-acclaimed live recording of Smetana's Má vlast from the Prague Spring Festival in 2010. He has also recorded the Tchaikovsky and Bruch violin concertos with Nicola Benedetti and the Czech Philharmonic for Universal. Jakub Hrůša studied conducting at the Academy of Performing Arts in Prague where his teachers included Jiří Bělohlávek. Previously he served as Principal Conductor of the Prague Philharmonia. Music Director of the Bohuslav Martinů Philharmonic, Associate Conductor of the Czech Philharmonic, and Young Associate Conductor of the Orchestre Philharmonique de Radio France. He is currently President of the International Martinů Circle.