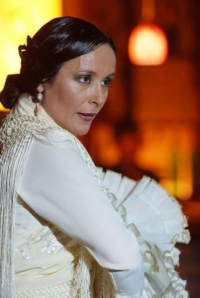 The Sevillian Flamenco dancer Irene Alvarez began her training in classical Spanish dance at the age of nine with the famous Matilde Coral in the "Real Conservatorio Superior de Musica y Danza" in Seville. In 1993 she earned her degree and since then she has continued to perfect her dancing with guidance of legendary dancers such as El Güito, Manolo Marin, Javier Latorre, Isabel Bayon, José Galván, Pilar Ogalla, Angel Atienza and Manuel Betanzos. Building on the traditional Flamenco she has developed her own distinctive style which constantly moves between an impulsive, sometimes quite modern expression, and the feminine elegance which is the hallmark of the Sevillian school. In 1992, Irene starred in the film "Sevillanas" by Carlos Saura, but she only began to perform in tablaos and international theaters on a regular bases since 2002. She frequently collaborates with guitarist Antonio Andrade and the dancer Federico Ordoñez, with whom she founded "DOS" .

In addition to her performances at various European festivals (including Guitar Festival Balatonfüred, Hungary Festival "Sur les Routes des Musiques Tsiganes" 2009, Caen, France, Berliner Philharmonie 2009/2010, Germany, Flamenco Festival Rotterdam, Gypsy Festival Tilburg 2010, Netherlands), she has also been invited as a guest soloist with the guitarist Rafael Cortes, the Polish group "Los Payos", "Sevilla Mia" (Ramirez, Cristina Hall), "Inspiracion Flamenca" (with guitarist Ulrich Gottwald) and several cross-over projects such as "El Pelele - Noche de Canciones Españoles ", the indian-andalusian "Kathak Flamenco" with the "Music Ensemble of Benares" and José Parrondo and the "Classic Club Nights" with the trombonists of the "Rotterdam Philharmonic Orchestra" in concert-hall "De Doelen"(2011). In 2010 she founded her own "Cuadro Flamenco Irene Alvarez", along with singer Carmen Fernandez and guitarist Alexander Gavilán and produces the programs "The Alegrias Soleares y" and "Zarzamora." Irene leads her own dance school "Arrebato", was assistant to the Maestra Isabel Bayon during the festival of Jerez in the years 2009 and 2010 and is a guest lecturer at Codarts Rotterdam.