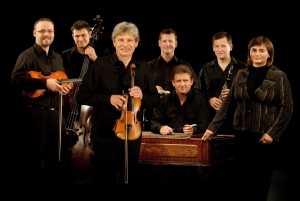 The Hradišťan Dulcimer Band belongs to the oldest and most well-known Moravian dulcimer bands. The ensemble was formed together with a dance group in Uherske Hradiste in 1950. Since that time several generations of musicians, singers and dancers have gone through its personel, first under the long-time leadership of Jaroslav Stanek. His creative approach to folk material changed the understanding of its stage presentation as a series of songs and dances towards more elaborated artistic compositions.

Since 1975 Jiří Pavlica has been the artistic director and the first violinist and the group has undergone gradual transformation under his directorship and demands on the members gradually increased. The methods of work, dramaturgy and artistic standart make Hradistan one of the most unique ensembles not only within their region. It is a regular guest of television programmes, national and international festivals of traditional, alternative, but also classical music, where it has gained numerous awards. The Hradistan dulcimer band has recorded more than 25 records and CDs itself and has cooperated on many others. Although concert performances (about 150 concerts a year) are the band¨s main activities, the joy of music is the basic sense.