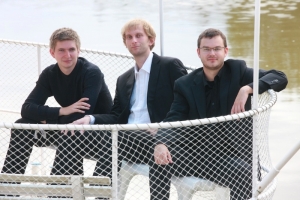 The Dvořák Trio brings together three young musicians – namely Ivo Kahánek, Jan Fišer and Tomáš Jamník – who all belong to the best performers of their trades. Having appeared on stage under the name “Trio Concertino” as early as 2004 at the Music Faculty of the Academy of Performing Arts in Prague under the guidance of Prof. Josef Chuchro (a former member of the Suk Trio) and Ivan Klánský (a member of the Guarneri Trio), the three artists could soon celebrate their first success as the winners of the 9th Bohuslav Martinů Foundation Interpretation Competition the same year. In 2007, the ensemble was awarded the Prize of the Czech Chamber Music Society, a part of which was a debut in the Dvořák concert hall of the Rudolfinum in Prague. The Dvořák Trio performs outside the Czech Republic regularly. In 2007, the ensemble was invited to cooperate with the German foundation Villa Musica and their senior lecturers, Eszter Haffner and Jean-Claude Gérard. Their 2008 performance at the “Murten Classic” festival with the Capella Istropolitana, directed by Kaspar Zehnder, included A. Casella’s Triple Concerto. This was followed in 2009 by a tour of German cities with the National Theatre Chamber Orchestra, playing B. Martinů’s music, and a tour of chamber music concerts in Asia. The Trio then performed at the renowned Styriarte Graz festival with a purely Czech repertoire – A. Dvořák’s Dumky and B. Smetana’s Trio in g minor. The current season has seen the ensemble performing at the final concert of the Days of Czech-German Culture in Dresden as well as on one of the afternoon concerts in the Berlin Philharmonic.

Ivo Kahánek studied piano in Prague with I. Klánský and in London with R. O’Hora. In 2004 he won the 56th Prague Spring international music competition, something only two other Czech pianists had been able achieve so far. His London debut came in 2007 at the BBC Proms in the Royal Albert Hall with the BBC Symphony Orchestra directed by Jiří Bělohlávek. His latest CD, devoted to the music of F. Chopin (Sonata b minor, Scherzi) was released in September 2010 by Supraphon.

Jan Fišer is the concert master of the Czech Chamber Philharmonic Orchestra and was awarded the “Davidoff Prix”, given to the most talented among Czech musicians. He often cooperated with Josef Suk, with whom he performed Bach’s Double Concerto (as his musical partner) or Mozart’s Violin Concerto in A major (as the soloist, Maestro Suk conducting). He often performs with the orchestras, the most notable of which include Pittsburgh Symphony Orchestra and others. Upon completion of his studies at the Prague Conservatory (Prof. J. Foltýn) he pursued further studies at Carnegie Mellon University (A. Cárdenes).

Tomáš Jamník studied in Prague (M. Škampa, J. Chuchro), Leipzig (P. Bruns) and Berlin (J. P. Maintz). From 2010 to 2012 he was on scholarship at the Karajan Academy to the Berliner Philharmonic. He won the 58th Prague Spring international music competition and was chosen to play in the final round of the renowned “Pierre Fournierre Award 2011” competition in London. He recorded his debut, described as the “debut of the decade”, with Ivo Kahánek in 2007. His debut with the Prague Chamber Philharmonic Orchestra (conducted by J. Hrůša) came in 2010 with Schumann’s Cello Concerto, followed by the 2012 debut with the Czech Philharmonic Orchestra (conducted by E. Inbal), playing Schumann’s Cello Concerto.