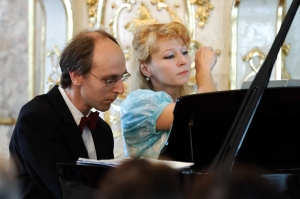 Igor Ardašev indisputably ranks alongside the most distinguished representatives of younger generation of European pianists. A native of Brno, he made his early steps towards instrumental mastery under the guidance of Inessa Janíčková at the Brno Conservatory and, subsequently, Janáček Academy of Music. He then furthered his education by frequenting master classes of Paul Badura-Skoda and Rudolf Serkin. His youth competition triumphs (notably in the Smetana contest and Concertino Praga International Radio Competition) were followed up surprisingly soon by further remarkable achievements, including particularly fifth prize from the super-prestigious Tchaikovsky Competition in Moscow, laureateship of the Prague Spring International Competition, as well as notably excellent results he attained during the first half of the 1990s, when he successively received first prize from the Maria Callas Competition of Athens, title of laureate from the Brussels Queen Elizabeth Competition, first prize from the Belgian Radio and Television contest, and laureateship from the Marguerite Long and Jacques Thibaud international contest in Paris. Today he has to his credit an imposing number of successful recitals and concert appearances in Europe, America and Japan, plus a long list of exquisite recordings. In the last-mentioned category,the most interesting titles include a number of solo projects (Tchaikovsky, Liszt, Beethoven, Dvořák, Ježek, Janáček, Martinů and others), a piano duet version of Janáček´s Jealousy overture (in collaboration with Rudolf Firkušný), and a complete set of the duet version of Dvořák´s Slavonic Dances, played there with Renata Ardaševová.

Renata Ardaševová, the artistic partner of Igor Ardašev, laid the foundations of her future artistic development at the Ostrava Conservatory (piano, composition) and, subsequently, Janáček Academy of Music (under Inessa Janíčková) and various international interpretation courses. While still a student, she took part in six interpretation and composition contests in her home country, winning first prize in each of them, making a particularly deep impression on the audience by her victory in the international Chopin competition of Mariánské Lázně, and by the performance which earned her the Gordon Trust Prize from an international contest in Glasgow. She lets her original talent flow with magnificent ease in an impressive gallery of soloist creations, as well as in superbly inventive and inspired collective endeavours encompassing various chamber music genres. Presently, together with her performing career in duo with her husband, she is a Professor at Janáček Academy of Music in Brno.