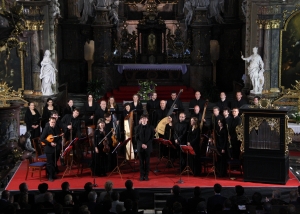 Since autumn 2008, both ensembles have regularly returned to Dresden, where, concurrently with Prague, they present their concert cycle Music Bridge Prague — Dresden, which continues on the rich cultural tradition of both cities, focussing primarily on the locally active composer, Jan Dismas Zelenka, his contemporaries and his predecessors.

Collegium 1704 and Collegium Vocale 1704 celebrated the year of Handel in 2009 with repeated performances of his oratorio La Resurrezione (The Resurrection) and the opera Rinaldo (director Louise Moaty).  Rinaldo conquered the hearts of audiences in the National Theatre in Prague, Grand Theatre in Luxembourg, Opéra de Rennes and Theatre de Caen, where it was recorded and broadcast on TV France 3. In January 2011 Rinaldo was performed in the Opéra Royal de Versailles and acclaimed "the most beautiful preformance of 2010 " (Radio France, Gérard Courchelle).

Concerts of both “Collegium” are often broadcast live as well as recorded by radio stations in the Czech Republic, France and Germany and also by Czech Television and French TV Mezzo. Their recordings for Arta records (Benda), Supraphon (Zelenka, Reichenauer), Zig-Zag Territoires (Zelenka) and Accent (Zelenka) have been favourably received in Europe and further afield. Officium defunctorum & Requiem by Zelenka was awarded CD of the Month and Editor´s Choice of prestigious GRAMOPHONE Magazine in June 2011.