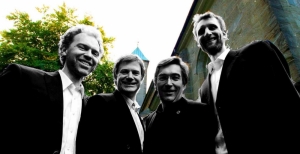 Bergen Barokk was established by Frode Thorsen and Hans Knut Sveen in 1994 in connection with a concert series supported by the city arts department in Bergen and is today one of Norway’s leading early-music ensembles. The group has concertized and appeared in radio broadcasts in Scandinavia, Russia and USA. Their recordings on Simax Classics, BIS, Bergen Digital Studio and Toccata Classics include German, English, Italian and French repertoire.

The ensemble has since 2006 worked with the complete recording of Telemann’s cantata cycle “Harmonischer Gottes-Dienst”, a collection of 72 cantatas for all Sundays, Passiontide and feast days of the liturgical year. The project is a collaboration between The Grieg Academy (University of Bergen) and Toccata Classics, London. As the performing group in the project, Bergen Barokk has recorded 6 of the total 11 CDs. “A Holberg Recital” is Bergen Barokk’s 3 CDs series with music which is based on the Danish-Norwegian writer, essayist, philosopher, historian and playwright Ludvig Holberg’s musical taste and possible repertoire.

Bergen Barokk has collaborated with several ensembles through the recent years, some of them are Pratum Integrum (Moscow), Norwegian Soloists’ Choir and Barokksolistene (Norway). Bergen Barokk has performed on Festspillene i Bergen, Philadelphia Bach Festival, Moscow Early Music Festival.