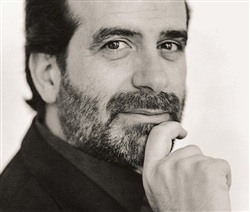 Andrea Marcon, a native of Treviso, Italy, is one of the most recognized musicians and specialists in the field of early music.
Andrea Marcon studied at the Schola Cantorum in Basel as well as with Luigi Ferdinando Tagliavini, Hans van Nieuwkoop, Jesper Christensen, Harald Vogel, and Ton Koopman. In 1980 he founded the Sonatori de la Gioiosa Marca, and in the 1997 the Venice Baroque Orchestra, one of the leading orchestras in the area of Baroque music.

Today, Andrea Marcon is recognized throughout the world as a conductor of Baroque and Classical music. Through his intensive studies of musical tradition, he has succeeded in saving a number of Baroque masterpieces from oblivion.
Well-known soloists, including Magdalena Kozená, Andreas Scholl, Anna Netrebko, Cecilia Bartoli, Angelika Kirschlager, Christine Schaefer, Giuliano Carmignola, Viktoria Mullova, and Katia und Marielle Labèque, enjoy working with him. Andrea Marcon has appeared as a guest in the Royal Albert Hall (Proms) and the Barbican in London, the Théâtre des Champs Elysées and Théâtre du Châtelet in Paris, Amsterdam’s Concertgebouw, Berlin’s Philharmonie, the Tonhalle in Zurich, the Palau de la Musica in Barcelona, the Musikverein and the Konzerthaus in Vienna, Lincoln Center und Carnegie Hall in New York, Los Angeles’s Disney Hall, Boston’s Jordan Hall, and Opera City Hall und Kyoi Hall in Tokyo.

Numerous CD recordings that have been awarded the Edison Prize, the Echo-Klassik Prize, the Diapason d’Or, and others bear witness to his work as conductor, organist, and harpsichordist. Andrea Marcon has taught as guest professor at conservatories and universities in Amsterdam, Copenhagen, Goteborg, Lyon, Hamburg, London, Seoul, and Tokyo, and has been Professor of harpsichord and organ at the Schola Cantorum Basiliensis since 1997.